A Visit From St. Valentine

Back when I was in college, I took some writing classes.  A lot of writing classes, actually, but I'm sure that's pretty obvious to anyone who reads this blog.  Right?  Right?!

And no, I didn't take any drawing classes.  My artistic abilities are 100% natural and unimpeded by higher education.

Anyway, my first ever writing class was Writing 105.  No one in the class wanted to be a writer; it was an elective and most of us planned to suffer through it while on our way to various science-related degrees.  Not even the professor took the class seriously, which is how I came to write the greatest Valentine's Day poem EVER.

Dr. Writing Professor decided to have a poetry contest for Valentine's Day.  At first I was all like, "OK, whatever, just give us all A's and let us go dissect something in one of our more fascinating classes," but then he said the magic words:  "Whoever writes the best poem wins a...CANDY BAR."  Woot!  As soon as the said "Candy Bar" this lightning bolt of inspiration totally struck my brain and I knew I had the most awesomest poem idea. Walt Whitman's got nothin' on me.

I ran back to my dorm and feverishly wrote for at least 40 to 45 minutes.  The inspiration just flowed right out of me and I knew I was on to something when I was in tears over my own poem.  Now, fifteen(ish) years later, I present to you the most epic piece of poetry you will ever read.

I'm pretty confident about that claim because who actually reads poetry anymore?

A Visit From St. Valentine
by Alli Maidenname (I wasn't Psycho yet, duh)

'Twas the fourteenth of February and all through the world,
Not a female was happy, not one single girl.
The vases were set on the table with care;
In vain hopes that some flowers soon would be there.
The women were dreaming of men who were foxes,
And visions of chocolate in heart-shaped boxes. 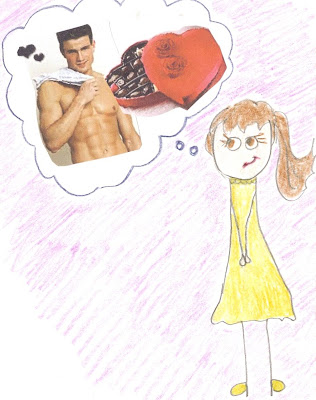 And my roommate on the beanbag and I in the chair,
Had just settled down to fix up our hair;
When out in the hall there arose such a clatter,
We sprang from our seats to see what was the matter.
To the window a girl flew like a flash,
She tore open the shutters and threw up the sash.
Her tears fell three stories to the new fallen snow,
Then she hurled herself down to the ground below. 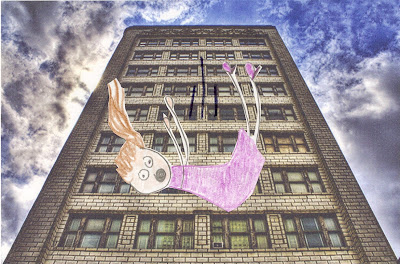 When what to my wondering eyes should fly in,
But a big red cloud and eight tiny cupid men
With a smelly old driver, like turpentine,
And I knew it a moment it must be St. Valentine.
More rapid than eagles his cupids they came,
And he laughed, and he jeered, and he called them by name;
"Now Crusher! now Butthead! now Dorkfish and Cheater!
On Liar! on Scumbag, on Cheeseball and Wife Beater!
To the top of the dorm!" yelled the scraggly old fart,
We'll find every woman and tear out her heart!"
All through the air the ugly cupids did fly --
They seemed to represent every earthly guy. 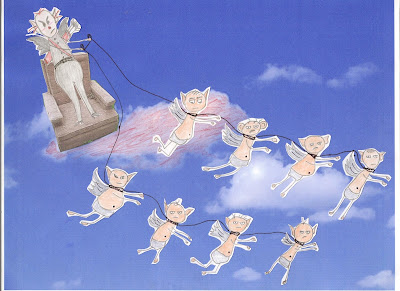 So up to the dorm roof the cupids they flew,
With a cloud full of doom and St. Valentine too.
And then, in a twinkling, I heard with my ears,
St. Valentine laughing at lonely womens' tears.
As I drew from my closet a sound baseball bat,
He leaped into my room like a fat, lazy cat.
He was dressed all in black, from his head to his toes,
Attempting to spread his Valentine woes.
A bundle of arrows he had slung over his shoulder.
My roommate fainted and fell like a boulder.
His eyes, how they burned!  His rear end, how hairy!
His cheeks were all hollow, his nose red from sherry.
His tight little mouth was drawn up in a sneer,
And the hair on his chin was like that of a steer.
A rotten cigar he held clamped in his teeth,
And the smoke it encircled him just like a sheath.
He had a fat face and a big old beer gut
That shook when he laughed like a prostitute's butt.
He was slimy and crude, a right nasty old elf,
And I felt sick when I saw him in spite of myself. 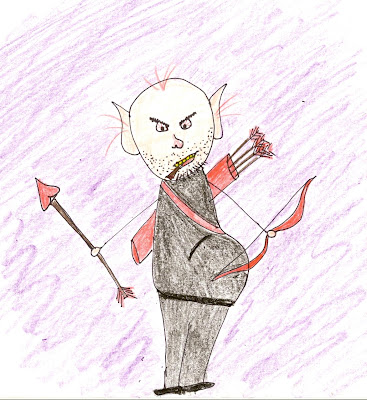 A wink of his eye and a twitch of his head
Soon caused me to be all filled with dread.
He spoke not a word but went straight for my heart
And soon got a shock that gave him a start.
I laid my 'ball bat upside of his nose
And, pausing for breath, I then smashed his toes.
He sprang to his cloud, to his cupids did cry,
And away they flew, away through the sky.
But I heard him exclaim as he dove out of view,
"Go to hell!"
I replied, "St. Val, screw you!" 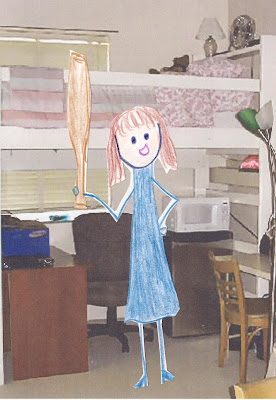 So OBVIOUSLY I won that candy bar and OBVIOUSLY I changed my major from Biology to Creative Writing!  I will never forget the look on Doctor Writing Professor's face when I told him I wanted to change my major but I know he was thinking of my award-winning poem and lamenting the fact that I'd wasted an entire year and a half of my college education on the useless world of biology.

I mean, who ever wins a candy bar for dissecting a sheep's eye or extracting DNA from ground beef?

Have a Happy and Psycho Valentine's Day!!

Flossing Those Hard to Reach Places

I'm going to let you in on a little parenting secret.  If you already have children past the baby stage, you've probably experienced this.  If not, well, consider yourself warned.

OK.  Imagine your future child at any point in childhood.  Toddler, grade school, high school, whatever.  Now, think of a few stupid things that kid might do.  Imagine the ways you will prevent those stupid things from happening and how your child will be raised properly in order to avoid such silly catastrophes.

Are you ready for this?  Whatever you just imagined will never happen.  So go ahead and think of some more really dumb things your future kid might do.

Yeah, those things will never happen either.  The parenting secret you never hear about is this:  Your children will come up with bizarre antics you cannot possibly predict or prepare for.  All of the things you worry about will never happen.  Instead, completely different things you  never even dreamed of worrying about will sneak up on you and force you to question the sanity and intelligence of your offspring.

Case in point:  One afternoon a few weeks ago as I enjoyed a quiet afternoon at home, the telephone rang.  Thanks to Caller ID, I knew it was our family dentist.  I also knew my mother-in-law, whom we call Nonni, had some dental work scheduled for that day and, perhaps, was too drugged to drive herself home.  As always, I was completely unprepared for the true nature of the phone call.  A transcript of our conversation follows:

Dr. Dentist:  Fine, fine!  You know, your mother-in-law was here today and said some things about Secondo that I want to talk to you about.

Dr. Dentist:  Uh, yeah, Secondo.  It's probably fine, but Nonni said he told her he ate some dental floss.

Me:  (there's no way I actually heard what I thought I heard)  What?

Dr. Dentist:  Yeah, I guess Secondo had a full container of floss that he found on the counter and, well, decided to chew on it because it was minty and then he, um, ate it.

Me:  He ate it?  Actually swallowed it?  (My kid ate dental floss and I had no idea.  Parent of the Year?)

Dr. Dentist:  I don't know what it will do to him.  If he swallowed it all in one big blob, it might stay that way and just, you know, pass.

Dr. Dentist:  But if it came unraveled in his stomach or, you know, on the way down, it might not come out all at once.

Dr. Dentist:  You might want to talk to Secondo to make sure if, you know, some of the floss comes out he doesn't, um, pull on it.

Me: (flashback of what once happened when our very grumpy, tailless calico cat ate a bunch of yarn)

Dr. Dentist:  (clearly extremely embarrassed now)  Yeah, so, I guess if that happens and only, um, part of the floss comes out, you should call the doctor and see, um, if there's something they can do.  But you know, I just want to make sure Secondo doesn't tug on the floss because that might, um, damage something.

Dr. Dentist:  (nervous laugh)  I never thought I'd have to make a phone call like this.

Me:  I never thought I'd get a phone call like this!

After a few more awkward laughs (there really is no smooth way to end a phone call about dental floss emerging from your child's butt), we both hung up.  I was home alone and actually blushing from that ridiculous conversation.  Then, the Mom Mind kicked into overdrive.

See, when you become a Mom a part of your brain becomes irrational, paranoid, and extremely loud.  It doesn't matter how rational, smart, and calm you are before you have kids.  There's no escaping the Mom Mind, which insists a child not immediately within your line of vision is being kidnapped.  The Mom Mind thinks a skinned knee could be fatal, a fever is spinal meningitis, a rash is an antibiotic-resistant staph infection, and a school bus more than five minutes late has crashed and killed everyone on board.


I usually attempt to ignore the Mom Mind and only listen to the rational part of my brain that quietly reminds me I'm not living in an episode of ER or Law and Order SVU.  I told myself to wait until Secondo came home from school so I could ask him about the dental floss before calling the pediatrician.


But wait.  What if, right at that very moment, Secondo happened to be using the bathroom at school and happened to notice something odd?  What if he had dental floss hanging out of his rear end and tugged on it a bit too hard?

Shut up Mom Mind!  That's totally not even possible!


When Secondo got home from school, I asked him about the dental floss.  I said, "Dr. Dentist called because he was worried when Nonni told him you ate an entire roll of dental floss."


Secondo looked at me like I was out of my mind.  He said, "I didn't EAT the dental floss!  I just sucked all the minty flavor off and then spit it in the garbage.  Who would eat dental floss?!  That's crazy."


I am so glad I didn't call the pediatrician or the school nurse. 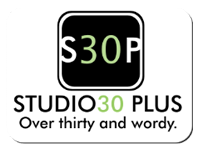